Who was Dr Franz Gerstner? 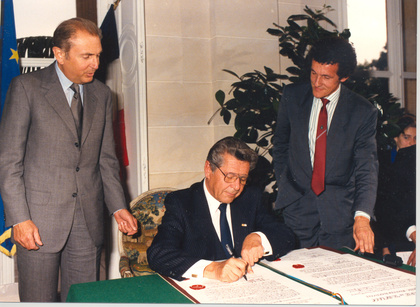 Dr Franz Gerstner (in the middle of the picture), president of the Bezirk of Lower Franconia from 1970 to 1994, experienced D-Day in Normandy as a 19-year-old paratrooper. During his captivity as a prisoner of war, his desire for reconciliation between the Germans and the French and for lasting peace in Europe increased more and more.

Due to his strong personal commitment, he always tried to pursue his goal, as a city councillor in Würzburg, in the university administration, at the company for public transport in Würzburg and finally at the Bezirk of Lower Franconia.

After numerous meetings with Michel d’Ornano, president of the General Council of Calvados at that time, the regional twinning between Lower Franconia and the Calvados was sealed in 1986 and 1987.

The scholarships in the total amount of €3000 granted by the Bezirkof Lower Franconia, subject to the available budget funds, were assigned for the first time in 2005. The scholarships serve as a contribution towards the German-French bond and international understanding.